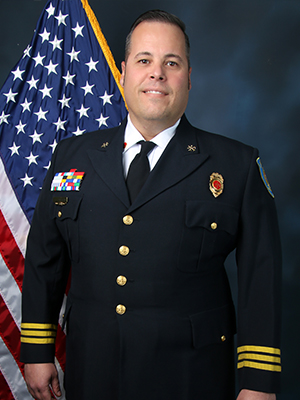 Assistant Chief Wilson has 21 years of public safety experience and has been with the department since 2001. In the role of Assistant Chief, Harley will oversee and provide direction for the Operations Division and is responsible for personnel and emergency responses for the department. These services include Fire Suppression, Emergency Medical Services, Training, Technical Rescue and Urban Search and Rescue, Aircraft Rescue and Firefighting, and personnel management.

Assistant Chief Wilson began his career with Lakeland Fire Department as a Firefighter in 2001. He was promoted to Lieutenant in 2008 and served in his most recent capacity as Battalion Chief since June 2017. Wilson is also a Veteran of the United States Navy, where he served as a shipboard firefighter for more than four years.

Assistant Chief Wilson is a member of the Florida Fire Chiefs' Association. He earned his Associate's Degree in Liberal Arts from Hillsborough Community College and a Bachelor's degree in Fire Administration from Columbia Southern University. Assistant Chief Wilson is a graduate of the Florida Fire Chiefs' Association (FFCA) Emergency Services Leadership Institute (ESLI) and the City of Lakeland's 48 Hours Investing in You Leadership Curriculum.