Agency Promotions Announced, Including Selections for Assistant Chief and Captain

Promotion Ceremony to be held on Friday, December 2, 2022,
at the Lake Mirror Auditorium 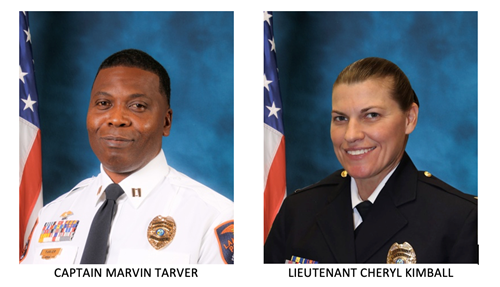 LAKELAND, FL (November 18, 2022) - The Lakeland Police Department is proud to announce that Captain Marvin Tarver and Lieutenant Cheryl Kimball have been selected as the department’s newest Assistant Chief and Captain, respectively. Upon assuming the role of Assistant Chief, Tarver will command the Neighborhood Services Bureau, which includes the Uniform Patrol Division. In the new role of Captain, Kimball will lead the Community Services Section, which is comprised of the School and College Resource Officers, Police Athletic League, Neighborhood Liaison Officers, Victims Assistance, and Crime Prevention teams. In total, the agency has three Assistant Chiefs and five Captain positions. Captain Tarver and Lieutenant Kimball will begin serving in their new roles on December 4, 2022.

Regarding the promotions, Interim Chief Sammy Taylor said, “Captain Tarver and Lieutenant Kimball are well-established leaders within our agency, with a combined 47 years of service at the Lakeland Police Department. Both have proven to be strong servant leaders for our community. I look forward to working alongside them, continuing to provide the high standard of law enforcement services our citizens deserve.”

More About Captain Marvin Tarver:
Captain Marvin Tarver has served in law enforcement for over 30 years. He began his career with the Polk County Sheriff's Office in 1991. Shortly afterward, he became dual certified and accepted a police officer's position with the City of Auburndale Police Department in 1993. He subsequently assumed roles as a Community-Oriented Police Officer practicing community policing in various neighborhoods and later as a School Resource Officer.

In 2010, Marvin was promoted to Police Sergeant, where he supervised officers in the Uniform Patrol Division. He was later assigned to the Special Investigations Division, where he supervised the Community Response Team. This covert plain-clothes unit utilized tactical problem-solving techniques to address criminal activity in the City of Lakeland's residential neighborhoods and business districts.

In 2013, Marvin was promoted to Police Lieutenant. As a Lieutenant, Marvin oversaw the Uniform Patrol Division-Alpha Squad and, later, the Special Investigations Section, which is primarily responsible for the detection and apprehension of individuals involved in the illegal sale, distribution, and possession of controlled substances.

In 2019, Marvin was promoted to Police Captain, where he directed the daily operations of the Uniform Patrol Division, which consisted of approximately 130 sworn and civilian personnel. In 2020, Captain Tarver was assigned to the Support Services Division, where he was responsible for the direction, planning, and coordination of the Training Unit, Hiring and Recruiting, Records, Communications, and Property and Evidence.

Marvin participated on the first SWAT Roundup Team at Lakeland Police Department to win the International SWAT Roundup Competition held in Orlando, FL. He has received a number of awards throughout his career, some of which include the Distinguished Performance Award, the Meritorious Service Award, the President's Roundtable Police Officer of the Year Award and the Chief's Award.

Marvin currently serves as the President of the Police Athletic League of Lakeland, Inc. (PAL), and he is the Chairman of the Community Engagement Taskforce (formerly the Mayor's Gang Taskforce). He is a member of the Polk County Police Chief's Association, the Florida Police Chief's Association, and the International Association of Chiefs of Police. Marvin is also a current participant in Leadership Lakeland Class XXXIX.

Marvin currently holds an A. A. degree in Liberal Arts, and a B. S. degree in Criminal Justice from Polk State College, and a M.S. degree from Saint Leo University. He is a graduate of the Florida Department of Law Enforcement's (FDLE) Florida Criminal Justice Executive Institute, Senior Leadership Program; the Southern Police Institute, Administrative Officer's Course (SPI-AOC); and the Florida Police Chief's Association, Future Chief's Program.

Lieutenant Cheryl Kimball was born and raised in Lansing, Michigan. She attended the University of Toledo on a softball scholarship and earned her bachelor's degree in Criminal Justice in May 1999. During the summer months, she played in the Majors.

In August 2001, Cheryl began her law enforcement career with the Lakeland Police Department. During her career as an officer, she served on the following teams: Patrol, Neighborhood Liaison, Neighborhood Enforcement, Street Crimes Unit, and Special Investigations Section (SIS).

In March 2011, Cheryl was promoted to the rank of sergeant. During her sergeant tenure, she supervised the Uniform Patrol Division, Special Investigations (Street Crimes Unit and Drug Enforcement Team), and Criminal Investigations Section (Property Crimes and General Crimes).

In January 2018, Cheryl was promoted to Lieutenant. During her tenure as a lieutenant, she supervised Patrol and, most recently, the Criminal Investigations Section. Cheryl is a graduate of the FBI National Academy, Session 274, and a graduate from the University of Virginia, where she earned her master's degree in Public Safety.

Cheryl Kimball became LPD's first female SWAT Officer in March 2003 and remained on the team for 15 years, at times serving as Squad Leader. At that time, she was believed to be the longest-serving active female SWAT member in the United States. In addition, Cheryl often competed in the International SWAT Round-up, going up against teams from across the globe.